The UNODR (United Nations Office on Drugs and Crime) descirbes human trafficking as “the acquisition of people by improper means such as force, fraud or deception, with the aim of exploiting them”. Human trafficking is the second most profitable crime globally: it is considered a 150 billion dollar industry.

Womenpreneur-Initiative caught up with Racha Haffar, an anti-human trafficking advocate. We discussed what inspired her to advocate in this field, what she is currently working on and her aspirations. 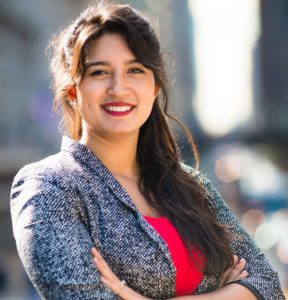 The beginning of her journey
Racha Haffar is half-Syrian and half-Tunisian. She was born and raised in Dubai and is currently living in the United States. At age 18 she came across human traffickers when trying to find a student job as an aupair in the UK. When contacting several families, she realised that they were reluctant to video chat. She then insisted on receiving a photo of the family and was sent a fake photo. It became apparent to her that she could have been a victim of human trafficking.
She started researching on the subject and understood that she had witnessed this form of institutionalized slavery when she lived in Dubai. She remembers an incident where she saw a maid trying to escape from the third floor of a building because she had been locked up by her boss. This was a turning point for Racha as she felt the responsibility to do something about the wrongful pratice of modern day slavery.

Racha is the founder of Not4Trade: the first anti-human trafficking organisation in Tunisia. Racha believes human trafficking needs to be tackled through prevention by the means of education, capacity building and research: https://not4trade.wordpress.com/

Her biggest ambition with this project is to firstly make sure that human trafficking gets the attention and urgency that it truly deserves. Secondly, she hopes that, one day, there will be a centralized way to connect all people of different domains and sectors working on the topic in Africa.

Racha is also participating in the Generation Equality Campaign, which assesses the reality of what has happened since Beijing in ‘95 (Fourth World Conference on Women). The women of the campaign will try to mend pending issues by setting up action coalitions for the next 5 years. These coalitions will be cross-sectoral, cross-continental at different levels and will include members of civil society.

Human trafficking happens all over the globe and it can happen to anyone: no matter your age or gender. It goes beyond the stereotypical idea of kidnapping: it involves coercion, recruitment and fraud. This is a crime concerning human dignity and basic human rights. Racha concluded the interview by saying: “How can you protect your own dignity in this world if you cannot fight for the ones who have lost it?”

How can YOU take action?